MarcyKate Connolly is a New York Times bestselling children’s book author who lives in New England with her family and a grumble of pugs. Like the main character in her most recent book, Shadow Weaver, she once had an imaginary friend who did very naughty things like eating directly from the sugar bowl and playing hide-and-seek with her parents—without telling them—whenever they went to department stores. Later in life, she graduated from Hampshire College (a magical place where they don’t give you grades) where she wrote an opera sequel to Hamlet as the equivalent of senior thesis. It was also there that she first fell in love with plotting and has been dreaming up new ways to make life difficult for her characters ever since. You can visit her online and learn more about her stories at www.marcykate.com.

Flaming Snot Rockets! Jim Hill holds an MFA in Writing for Children and Young Adults from the Vermont College of Fine Arts where he learned to write books with action, heart, and gobs of humor.

He has taught workshops and classes for the Arts Foundation of Cape Cod, the Cape Cod Writers Center, the Cotuit Center for the Arts, the New England Society of Children’s Books Writers and Illustrators and the Highlight’s Foundation.

His upcoming middle-grade graphic novel celebrates nerd culture, cosplay, and putting bullies in their place. It hits the shelf in the latter half of 2019.

He is represented by Sara Crowe of Pippin Properties, Inc., but you can find him online at heyjimhill.com or on Twitter as @heyjimhill.

Check out last year below!

Kristine Asselin is the author of sixteen works of children’s nonfiction as well as the YA novel Any Way You Slice It and co-author of the middle grade novel The Art of the Swap. She loves volunteering with the Girl Scout of Eastern Massachusetts and the New England Society of Children’s Book Writers and Illustrators, where she serves as an Assistant Regional Adviser for Massachusetts. She is a sucker for a good throwback 80’s song, and can’t resist an invitation for Chinese food or ice cream (but not at the same time). She lives in Central Massachusetts with her teen daughter and husband, and spends part of everyday looking for a TARDIS to steal. You can find Kris online at KristineAsselin.com.

Katie Bayerl fell in love with books before she can remember and with teaching when she was just a teen. The writing books for teens part came a bit later. She jumped right in and hasn’t looked back.

Katie has degrees in education from Brown, teaching from Tufts, and writing from Vermont College of Fine Arts. She has taught teens in a range of settings, worked as editor of a teen-generated magazine, led the communications efforts of a Boston nonprofit, and helped dozens of schools and nonprofits tell their stories. She currently leads the VCFA Young Writers Network and teaches classes for teens at GrubStreet. Her young adult fiction won early honors, including the PEN New England Children’s Book Discovery Award and the Flying Pig Bookstore/Vermont College Humor Award. A Psalm for Lost Girls (spring 2017, Putnam) is her first novel.

A 35 year veteran teacher, Mick Carlon’s three young adult novels—RIDING ON DUKE’S TRAIN; TRAVELS WITH LOUIS; and GIRL SINGER—are now in the curriculum of 100+ schools in the USA, France, and Spain.  He has spoken to students in New Orleans, Manhattan, Boston, Minneapolis, Dallas, Anaheim, Providence, and Los Angeles.  “Nothing like Carlon’s novels has yet been attempted in the history of Jazz,” said the late writer Nat Hentoff.  “He is introducing a new generation of fans to the glories and stories of America’s music.”

K.R. (Kate) Conway is a sarcastic bugger who likes to torment Cape Cod’s summertime tourists, taunting them about sneaky sharks and traffic-free backroads. She’s been a professional journalist since 1999 when several newspaper editors lost their minds and hired her as a feature writer. She is best known, however, for her six-book Urban Fantasy series, Undertow, which reads like a mash-up of Jaws and The Goonies. Awards, nominations, and features include Barnes and Noble’s Seven Terrifying Summer Reads for Teens (2015), Teen Ink Magazine’s Best Picks, Girl’s Life Magazine Cool Winter Reads, newspapers, magazines, and radio. Nominations include Indie Recon Live (Best New YA, Best Opening Line, Best Book Boyfriend), YALSA, Cybil, Goodreads, IRDA, and others.

The series has spawned fan fiction, fan art, jewelry, clothing, and even tattoos. Conway, who is a member of SCBWI, teaches fiction craft at writer conferences, high schools, and libraries. She lives on Cape Cod with her equally weird family and a strange assortment of critters. When not writing, Conway drives a forty-foot Loser Cruiser that smells like forgotten Pony sneakers from the 80s. She is the founder of the Teen Conference.

For Jeremy Flagg, it started with single comic book. Jeremy’s mother was determined to make a reader out of him. Shunning traditional literature at a young age, his mother placed X-Men Classic #69 in his lap and for the first time he was exposed to the phrases, “Mutants,” “BAMF,” and “SNIKT.” From that moment on, he imagined his enrollment at Xavier’s School for Gifted Youngsters at 1407 Graymalkin Lane.

By middle school he devoured fantasy and science fiction faster than he could check them out of the library. However, his first love remained comic books. He began writing his own comics with his best friend, and by the end of their eighth grade year, they had written over a hundred issues of the superhero series that would eventually become Children of Nostradamus. Meanwhile, he spent his Tuesday’s at the grocery store, rummaging the racks, reading any comic put on the shelf.

Jeremy became known as a geek before it was a trend. During college Jeremy would be shortened to Remy as friends discovered his goal of reading every X-Men comic. Being able to explain the many relationships of Scott Summers and his multi-dimensional children became a badge of honor. You can find him at his website, http://remyflagg.com 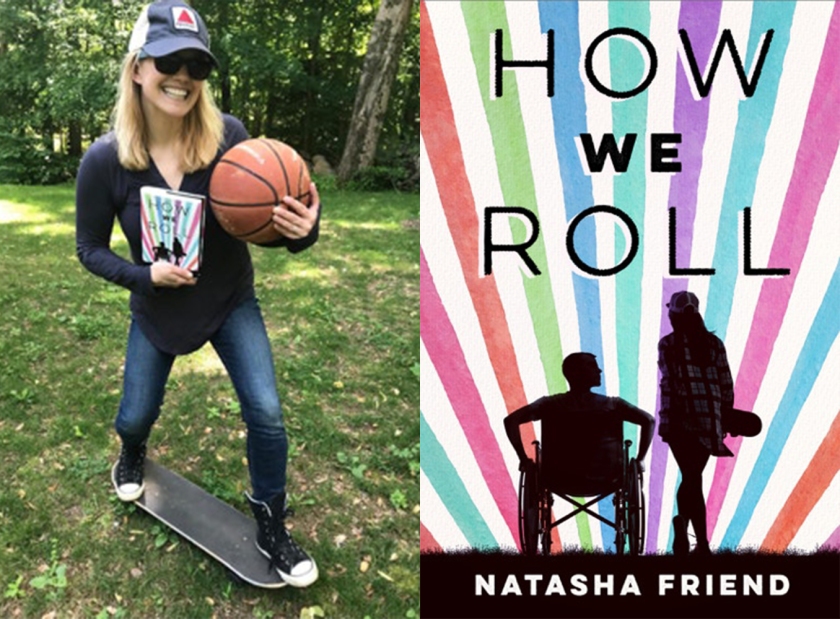 Natasha Friend became a writer in great thanks to her parents, who raised her in a house without a TV.  At the time, she thought this was the worst form of torture. Now she understands the method to their madness: they wanted her to be a reader.

She spent much of her childhood in the Hamilton Public Library in upstate New York, where she found her mecca, the young-adult section, and her idol, Judy Blume. Not long after discovering Are You There God, It’s Me Margaret, Natasha began dictating stories to her father, who typed them up on his 1930’s Remington typewriter. Most involved rainbows, unicorns, and poor orphan girls discovering treasure.

​Natasha knew she was supposed to be a real writer in seventh grade, when a sweet boy wrote her a love poem and she felt compelled to correct it for syntax and rhyme scheme.  (No, she did not grade it, and she did not hand it back to him.  She kept it, and treasures it still.)

​Because her spiritual age is 13, Natasha was a middle-school teacher for a while.  Then she was a camp director.  She decided to give full-time writing a shot after she got married because she knew she wanted to be a stay-at-home mom. Her first book, Perfect, was published right after her first baby arrived.  Natasha wrote a second book.  She had another baby.  Wrote two more books, had another baby.  Now, three kids and seven books later, she feel like she’s just hitting her stride.

​Natasha loves being a writing mom.  When she’s not working on her latest book, she’s building forts and making chocolate-chip pancakes.  Often, Natasha is wearing a silly hat.  Sometimes a press-on mustache.  She sings a lot.  She reads voraciously.  She eats peanut butter and banana sandwiches for breakfast.  Natasha likes a clean house, but is a horrible housekeeper.  She’d rather be having a spontaneous talent show in her dirty kitchen.  Or writing another book.

Flaming Snot Rockets! Jim Hill holds an MFA in Writing for Children and Young Adults from the Vermont College of Fine Arts where he learned to write books with action, heart, and gobs of humor.

He has taught workshops and classes for the Arts Foundation of Cape Cod, the Cape Cod Writers Center, the Cotuit Center for the Arts, the New England Society of Children’s Books Writers and Illustrators and the Highlight’s Foundation.

His upcoming middle-grade graphic novel celebrates nerd culture, cosplay, and putting bullies in their place. It hits the shelf in the latter half of 2019.

He is represented by Sara Crowe of Pippin Properties, Inc., but you can find him online at heyjimhill.com or on Twitter as @heyjimhill.

When she’s not reading or writing, Kathryn spends her time catching up on those mundane chores, driving kids around, and teaching writing classes. Two of her ghost story/romance titles, Gull Harbor and Haunted Souls, are set on beautiful Cape Cod, where she lives with her husband, their two sons, and a number of rescued pets.

Katie O’Sullivan is an award-winning writer, whose ten novels include the best selling My Kind of Crazy, Ghosts Don’t Lie, Crazy About You, and the Son of a Mermaid series for teen readers: Descent, Defiance, and Deception.

A recovering English major, she earned her degree at Colgate University and now lives on Cape Cod with her family and big dogs, drinking way too much coffee and working as an editor, magazine columnist and technical writer. Which explains all the coffee.

Francisco X. Stork is the author of seven novels including Marcelo in the Real World (Schneider Book Award), The Last Summer of the Death Warriors (Amelia Elizabeth Walden Award) and The Memory of Light (Tomás Rivera Book Award). His latest novel, Disappeared, was an Honor Book for the Walter Dean Meyers Award and received starred reviews from Kirkus, Booklist, School Library Journal and The Horn Book.